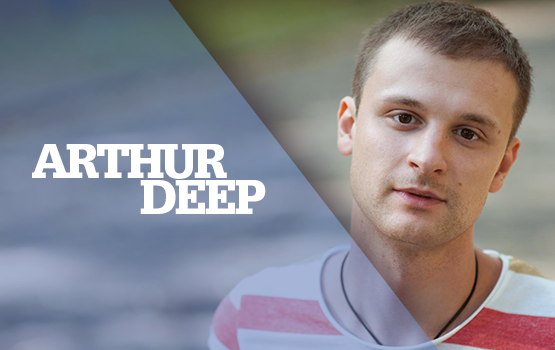 Arthur Deep (a.k.a. Arthur Abidzhba) has been immersed in electronic music for many years now, starting with his appreciation of tunes by Robert Miles, Jean-Michel Jarre, and Schiller as a boy and teenager. He started to discover a new side of music, when he began exploring various sub-genres of electronica: trance, ambient, progressive house & breaks, IDM and many more. Each time his choice would center on beauty and melody, as well as emotional, deep, and profound features in the music. He finished music school in violin class, but decided not to pursue the world of classical music. He was completely captured by electronic music.

Since 2006, he has worked as a producer-DJ, under the names “Arthur Deep” and “Solus Town”. Through all these years, Arthur has released numerous progressive house and breaks anthems on top labels worldwide; he was one of original inspirations of Silk Music. His tracks have been supported by the leading trance, progressive, and house DJs. Fans can now recognize his unique sound under Arthur Deep, Shiftone, Thicky Doll and some other, lesser known aliases.