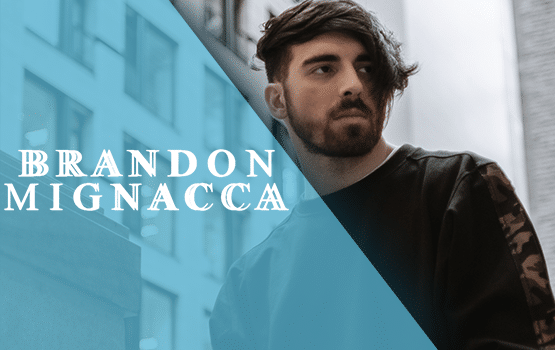 Brandon Mignacca is a singer, songwriter, composer, and producer, who has dabbled in multiple musical cultures and genres over the years.

Brandon had a fond love for trance and techno growing up, as he delved into the world of Euro-Trance and Euro-Techno, so it was a blessing when he was first introduced to the enriching world of toplining and collaboration in 2016, and in genres he grew up with no less. One of his first collaborations was with Montreal-based progressive trance duo Eagle I Stallian; they collaborated on “Connection Made,” which received a beautiful remix by renowned global producer Max Freegrant.

Over the years he has participated in numerous musical endeavors inside and outside of the electronic music scene. For example, he participated in Canada’s “The Voice” in 2017, reaching the quarterfinals, launched a pop project under the name Brandon Mig, with singles that have collectively amassed 2 million streams on Spotify, and hit the top of the radio charts in his home province of Quebec. He also performs in the alternative rock band “Chair Warriors,” which has been featured on Watch Mojo and its subchannel, Music Mojo.

Brandon was introduced to Los Angeles-based label Silk Music in 2018, and they have created a deep bond that is still ever strong today. His Silk Music discography to date includes “Bloom” and “Love Is” with Vintage & Morelli, “Ethereal” and “Iridescent” with Sound Quelle, and “Revive” and “One Minute Longer” with Approaching Black, and quite a few more. Brandon continues to work on heartfelt music with Silk’s phenomenal selection of artists and looks forward to bringing you more memorable musical experiences.